You can view the new pictures in my Concept Art page.

The drawing style on these sketches was purposefully a bit off. As they were supposed to be drawings in ancient books, so I spent countless hours studying Victorian engravings, old books, ancient languages and of course, Leonardo DaVinci’s sketch book, which I purposefully tried not to use too much as a reference. The overall look of the illustrations was a clever mixture between all of these styles and it was an attempt to reflect the arcane nature of this prop without going too far back in art history, since I didn’t like so much the graphic style of medieval artists.

Designing the Necronomicon: Anatomy of a Prop.

Now, since we’re on the subject, it is worth mentioning that the illustrations were not really the focal point of this prop. One of the biggest challenges was to create the the overall look of it and according to most Lovecraftian mythology, the book was supposed to be bound in human flesh (Gruesome, I know!). And since the most widely known depiction of it was in the movie The Evil Dead, from 1981 I decided to give a nod to it by making my prop inspired by Tom Sullivan’s design of the book. Pretty much like all previous iterations. 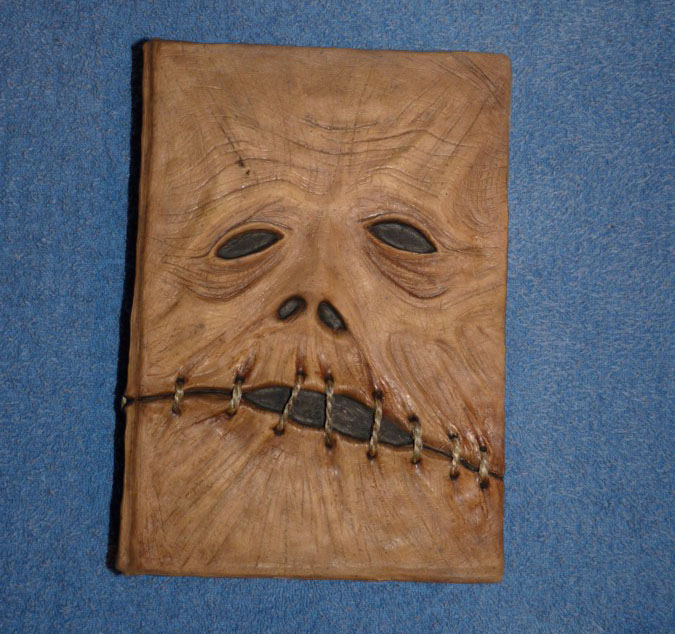 The book was carefully sculpted and detailed in clay, then molded in dentist’s gypsum and cast in my very own pre-vulcanized mix of latex (no, I do not have a recipe, it was all trial and error until I got the perfect consistency). I did not have any good reference for how tanned human leather would look like, so I based my design off yet another Hollywood movie prop; Leather Face’s mask, from the Texas Chainsaw Massacre films.
Unlike previous iterations of this prop, this time I used actual rope to stitch the mouth. In previous versions I usually would sculpt the mouth stitches out of some material, usually epoxy putty or papier-mâché, but this time I wanted to stick to reality as much as possible, so I used a very rough type of rope found in Mexico called “Mecate” to stitch shut the mouth, to add to the ancient-ness of the whole thing.
The core to hold the latex, in case you were wondering (and most of you won’t, but I’ll tell you anyway) was wood. A cheap piece of scrap plywood to be precise, which was bound in latex, just to give it structural strength. In all previous iterations I used cardboard, but since it could warp, I decided to use wood.

I won’t go into detail as to how I bound the book because I don’t want to bore you to death with the details, instead I am just going to bore you into a comfortable coma with the details of the pseudo-language that is inside this prop.
So, what’s interesting about it? Aren’t they just scribbles? Well, yes and no. It all started when I wanted to make this prop. I have been making Necronomicon replicas for almost 10 years at this point and I wanted this one to be my last, because I was kind of sick of making them. With each one of these replicas I was trying to perfect something and this was supposed to be my masterpiece, so I wanted every aspect of this thing to be as accurate as possible and the language of the book was one of my priorities.
Now, learning an dead tongue was a no-go for me. First, because NO! and second because HELL NO! and let’s not forget that NOOOOOOOOOOOOOOOOOOOOOO!!
In all seriousness though, it was going to be a lot more time consuming than just getting the visuals right, so focused in getting the looks right, rather than the meaning of the language.

You will notice that the annotations are a combination of Spanish and English, so please ignore that.
The first two pictures is what I used in my first props, they are random characters taken from several ancient alphabets, in all cases I scrambled the letters of the alphabet so no meaning can be taken from any of the books, even punctuation symbols were transformed into symbols to make it even more cryptic, even to the educated reader. However in the last picture, you can actually see the the annotations pertaining to the research I’ve done on ancient alphabets. You see, while in the first ones I used a dirty mish-mash of different ancient scripts like Phoenician, Aramaic, ancient Saxon runes, old Hebrew, Samaritan and even Sanskrit, in the last one I actually did some research on what Abdul Alhazred, the fictional Author of the Necronomicon might have spoken circa 730 A.D. and the problem with this was that it wasn’t clear. Perhaps to a scholar, but not to me. You see, that particular stretch of land has been occupied and re-occupied by a handful of cultures, each with their own script. The thing is: Our mad friend Abdul was born in Yemen, however he was living in Damascus at the time the Necronomicon was written, so I didn’t know whether he wrote it in South Arabian script, the one used in Yemen at that time, or Aramaic, the one used in Damascus, also at that time, so I combined both, scrambled the letters, like in the other two examples and made it into a digital typeface (A font). Then, taking passages from Simon’s Necronomicon (the same two paragraphs, actually), I populated the pages of my prop with these strange symbols.
I will not bore you any further with details pertaining to my research, but studying the alphabets in the grand scheme of things, made me realize how our language has evolved over the years. The letter “A” or the the letter “B”, they all had their roots in these ancient alphabets and just find this incredibly interesting and exciting!

With my previous versions of the book, I used to age the pages with coffee. I figured: Coffee is brown, so it can stain the paper. But the problem with this was that there was a side effect;  it stank of stale coffee. Now, I love coffee as much as the next guy. In fact I’m addicted to it and there’s nothing I love more than the smell of a fresh-ground dark roast, but I wasn’t going to use good coffee on this, I used the cheap soluble crap and the smell this thing had was quite strong (not in a good way) and for me this shattered the illusion that you were holding an ancient book in your hands so I had to find a suitable substitute that had had no smell.
After weeks of research I found out that tea, black tea contained a substance called tannin, also contained in grapes which has oxidizing properties, so I gave it a go. And while the aging of the pages was substantially less than with coffee, the smell was reduced to a minimum.
For those curious, I brewed a few bags of cheap tea and made a very concentrated solution that I then poured on a tray, where I dipped the pages and then dried them over the stove, one by one. All 120 of them.

Lovecraft would be proud

The book was featured in one of my shorts, called “The Book”, currently on YouTube. Oddly enough it wasn’t finished by the time I filmed it, I still had to bound the pages and add the finishing touches to the inside of the covers, but I had to work with the schedule of the person who was kind enough to let me film inside their house. In case you are interested, you can watch the short here:

After I finished the book, it spent a ridiculously long time on display in my room, being a conversation piece for a few years until it sold. I have no idea where it is today and on hindsight, I am happy that a piece of my work is now on display in someone else’s living room.
I will never forget what I’ve learned making it and I think that is what counts; The new experience and exciting knowledge I gained through the journey and the hours of fun I spent crafting each individual part of it.

Anyway, thanks for reading if you’ve made it thus far, and let me know in the comments down below if there is any piece from my portfolio you’d like to learn more about.